[This blog post will be of no interest to anyone sane]

I don’t think my Nuffield report mentioned hardware once. It’s pretty well incidental to the bigger picture, but that is not to say we don’t all like arguing about it anyway. Way back in March 2014 I went to visit Cross Slot in NZ, and since then have…participated…in the long and tedious debates that seem to crop up every time the drill is mentioned. The main point in summary is that the drill is incredibly expensive, and its ability to create extra yield to mitigate this is, depending on your viewpoint, unproven.

I have been trying since September 2014 to get a Cross Slot on this farm, so that I could see it with my own eyes. I had pretty well given up getting anywhere, when an opportunity arose not so long ago. There are now a handful of drills floating about this country, and one was based not far away. All it took to tempt it over here was a chequebook – it seems that demos are not possible or deemed necessary by the dealer. I had never intended to perform a trial, but it seemed like a good opportunity to try and get something done, and luckily John Deere stepped up at very short notice to send one of their machines. I had really wanted to get a Weaving GD as well, but that also proved impossible.

Anyway, 408 days after I first tried, a Cross Slot finally turned up at the farm. We had a few fields of wheat left to drill: mainly second wheats, but also a large field that had been peas. One second wheat field was split in half, and drilled with both our normal Horsch CO8 with narrow points, and the other half with CS. The pea field was drilled mainly with the Horsch, but one 8.8ha gap was left in the middle, which was the right size to allow two drills to put in a tonne of seed each, side-by-side. Let battle commence.

At least half our farm is super easy working light/medium soil. Any drill will produce good results. The trial field is however just about our heaviest. It is classified as clay (54% clay, 30% silt, 16% sand), but is relatively easy working because there is so much calcium in there from the chalk subsoil (87.6% Ca vs 3.7% Mg). There was plenty of moisture in the soil, but still just dry enough to drill. Even so, a Horsch prototype single disc direct drill could not actually get in deeper than about 10mm when we tried a few weeks previously. As far as this farm is concerned, if a drill works here, it will probably work anywhere else.

This was a 5m drill, with 21 openers, giving a 238mm row spacing. What is really incredible is the weight in such a physically small looking drill. 12t empty is almost unbelievable, but is accomplished by filling the frame with tiny bits of steel. This gives a theoretical pressure per opener of 571kg. Massive. There was a 280hp Claas tractor on the front. 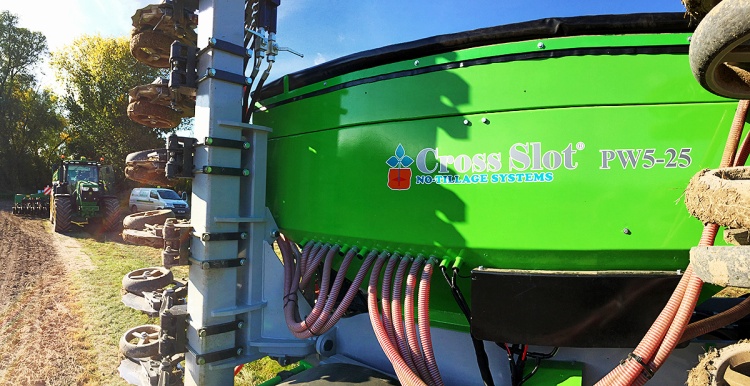 The elder statesman of direct drills. Well proven, but still flawed. And seemingly unloved, until this year at least, by its parents. The opening disc is much smaller than the Cross Slot, and the drill itself is much lighter, at 6.3-6.8t depending on how much ballast is added. This particular machine had none at all, which gives a theoretical pressure per opener of 175kg at a row spacing of 167mm. The standard closing wheels are often changed by owners, and here we had one side with originals, and one side with Guttlers. The tractor was a 195hp John Deere. 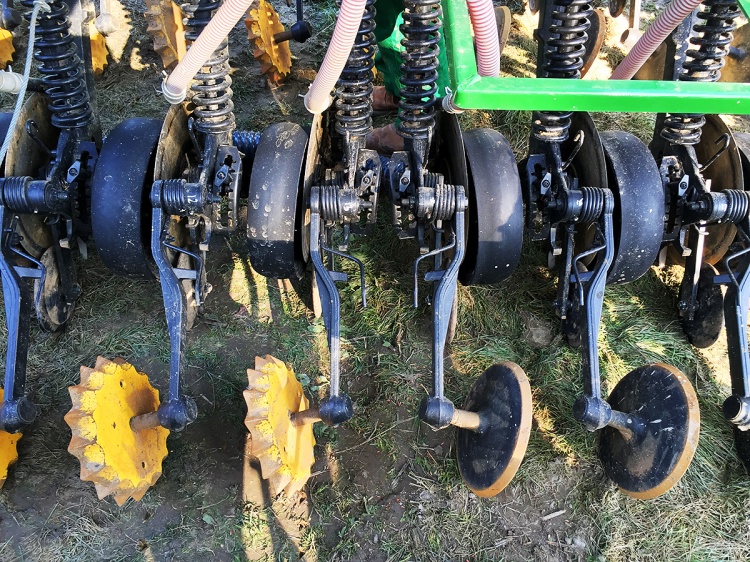 As it happening, the timing was totally perfect and both drills started off within minutes of each other. With only a tonne of seed to do each they wouldn’t be around for too long either.

Both machines were already set up for drilling wheat at around 30-40mm deep. The following are some of my thoughts from what I saw.

The CS also placed the seed well, but I was slightly shocked that at one end of the field which required every gram of the 12t to get in. You can see in the video below that there was no weight at all going through the drill’s wheels whilst it was in work.

I find this very worrying given that the conditions were soft. In a dry autumn I really doubt that no-till would be possible on these heavier fields with this drill.

Here are a couple of slo-mo videos of the drills working. Obviously the CS one I took in the wheat stubble from the first field it drilled. There looks to be a lot more soil throw from the 750a, but it’s much looser in pea stubble compared to wheat, so not a fair comparison. I should have got a video of the CS in the peas but ran out of time.

Here are some numbers that came up after the trials were done. I’ve added in our current drill for fun.

And now for some financials. The purchase price for the CS is a bit of an estimate based on a few things, one of which is a quote I have for a NZ made machine which came in at £175,000 for a 6m. Running costs are averaged out from multiple owners I have spoken to for both machines. I am assuming 1,000ha of drilling per year, for 10 years. To begin with I was going to try and estimate depreciation and use that cost, but then I started thinking about the extra finance and opportunity costs involved in buying more expensive machinery, and decided it was too complicated for a simple soul like me. So I have just gone with dividing the initial cost over the full term.

So we are looking at a difference between the 750a and CS of around £20/ha, otherwise known as about 2% wheat yield increase at current prices. [BUT very importantly, don’t forget that these are very different machines in terms of output, so to match up here would require a hugely more expensive CS setup].

I’m not sure how scientific this will get. It would be good to take plant and head counts as the year goes on. Obviously the real result, and the only one that matters here, is yield. I have some ideas on how to measure this accurately, but it will depend on some people being generous with their time and machinery. In the meantime all I can do is wait and see what the emergence looks like.

Both drills put the seed in the ground (just) and covered it with soil. I can’t see any reason at this point in time why one will give a better result than the other. I am struggling to see why for me, on this farm, at this time, there would be a benefit to spending more money to get a drill with a lower workrate that is more expensive to run. CS has a big potential benefit in that it can reduce hair pinning compared to a 750a when going in to cereal straw stubbles. For me this is not relevant as I would keep a tine drill for those jobs (cover crops and OSR mainly). CS also has incredible vertical travel on the openers (14″ IIRC), but that is about 12″ more than exists on our fields. The same goes for durability; CS has shown it can handle super rocky conditions, but then we do not have those. We farm very soft land, and some people have put tens of thousands of hectares through their 750as without much trouble (unlike this guy!).

Maybe though we will see what CS says we might, and get a 13-23% yield increase: