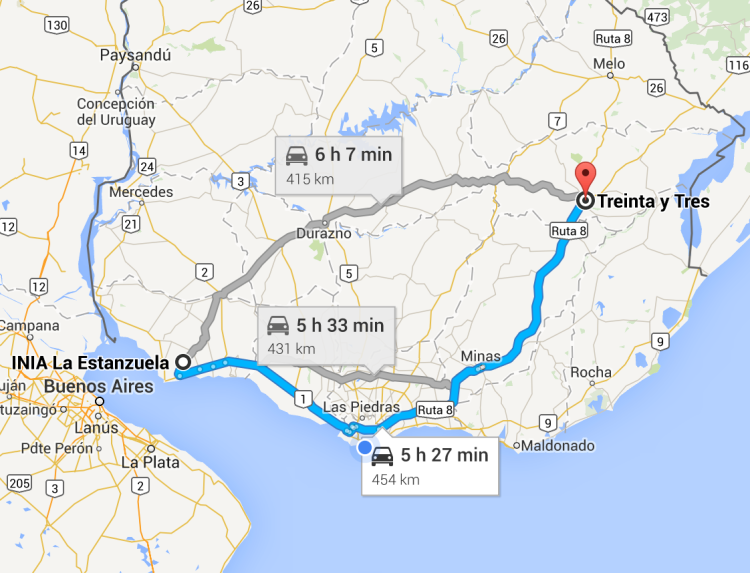 Today was another INIA day, but at their HQ, with a researcher called Andres Quincke. Here they have been running a trial which is now in its 52nd year, they are looking at the effect of rotations on SOM levels. There are three continuous cropping treatments. Two use the same rotation: maize – barley/sorghum – wheat/sunflower – maize. The difference is that one has been run in a conventional system, and the other without using any fertiliser at all. The third continuous cropping rotation contains soya, sunflower & wheat, with cover crops every other year. This is new though, so there are (I hate saying that) no data yet.

The remaining treatments use the same cash crops (maize, sorghum, sunflower, wheat, barley) but have differing amounts of pasture – 33%, 50% and 66%. The results are clear and interesting, but perhaps not entirely surprising. Any rotation with pasture will have significantly more SOM than continuous cropping. As you can see from the graph above, the 50 and 66% rotations are getting on for double the SOM compared to continuous cropping, and the trend is still upwards.

We’re often told that adding artificial nitrogen fertiliser destroys organic matter, and I’m sure that’s true. In a lab. But in the field it is clear in this experiment that the opposite happens. That’s because with the fertiliser there is hugely more crop residue going back into the soil. That benefits not only the SOM levels, but also massively increases resistance to soil erosion. The photo below was taken in one of the plots with no fertiliser: this happens every year, and does not happen in any of the other treatments. “We have shown now that this rotation does not work, perhaps it is time to change it to something new” says Andres. This has further repercussions too – if tillage creates crops with more biomass, it’s feasible that these systems will produce more organic matter than no-till ones. Something to think about.

The other striking thing came from a trial within the trial. They decided to look at whether the pasture phases (which all contain legumes) meant there was more available nitrogen for the following cash crops. To test this they have made small plots within the main ones, and have treated a maize crop with zero, half, normal and double nitrogen rates (0, 60, 120 and 240kg/ha). In the continuous cropping plot (with fertiliser), the difference was huge, and the plants with no fertiliser were very yellow and sick looking. In contrast, in the 50% pasture rotation, there was no visible difference between any of them! This was pretty amazing really, but of course you’ve got to wait until harvest to see what has really happened. This is definitely our situation at home; we are addicted to nitrogen.

So far so good, but I have two main problems with this trial. The first is with the pasture phases. They have no animals involved. This is an issue because they actually have to bale and remove the residues sometimes, which will obviously reduce, at least slightly, the potential to cycle carbon back in to the soil. Another problem is that grazing can possibly (so says Kris Nichols) actually have an extra beneficial effect on soil fertility, which goes beyond the simple addition of what comes out of the back end of a cow. So although the trials show a significant benefit from pasture, perhaps the effect would be even greater with grazing added in as well?

And there is the elephant in the room…money. They have measured SOC, which goes up. Hooray – but how many farmers, outside the hard core fanatics, are willing to farm just for this? Yields also go up, when taken in isolation. I.e. in the same year, a crop of maize/sorghum etc will yield more in a pasture rotation than in a continuous cropping one. However, they have not modelled overall profitability. Of course this is very hard to do, just choosing what numbers to put in for the value of the crops and beef has a massive effect. But what farmer is going to be convinced to change their system when the researcher cannot tell them if they will make more money?