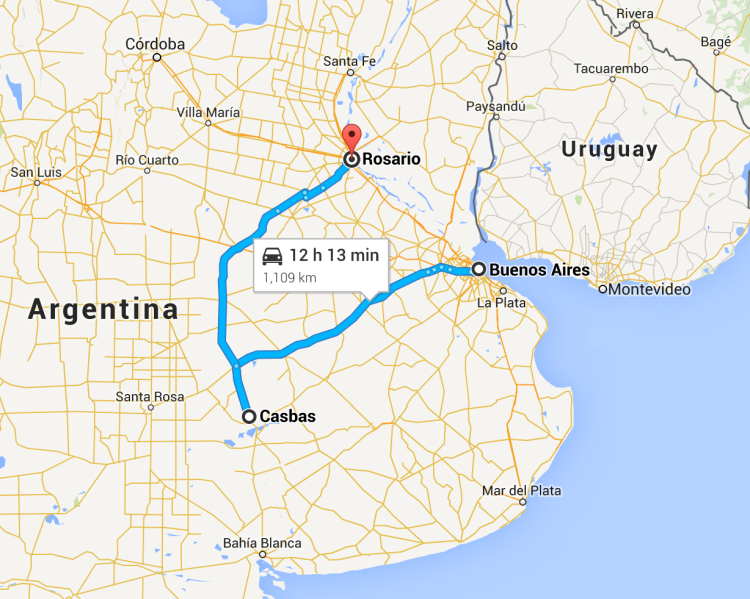 The flight didn’t turn out so badly; I was asleep before the drinks came round, and woke up 8 hours later. After watching the excellent film Boyhood, which I couldn’t figure out how they made, we landed and got in line at immigration. A few hours later, and with some black market Pesos in my pocket, I headed south towards Trenque Lauqen. It was coming up for lunch, so I kept my eyes peeled.

A quick u-turn was needed as I saw a place with loads of cars parked outside, and my Spanish dictionary confirmed “Parrilla” means “Grill”. The guy at the table next to me had a good looking rib of beef, so I pointed at it. “Asado?” “Si”. Three minutes later a piece of meat easily big enough to flip Fred Flinstone’s car turned up. It was a generous two person portion, or a stingy eight peoples’ worth. I didn’t manage to finish it.

The next day I met up with Eduardo Herrmann, who runs a company which has three farms. One of them is near the small town of Casbas, it’s called La Florida. 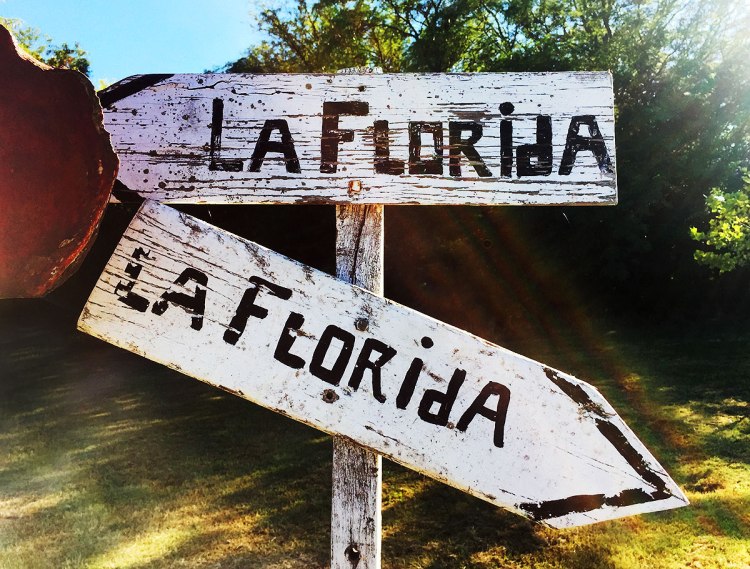 Eduardo started the day by giving us a short presentation on the farm. I say us because there were also teachers present from the local agricultural high school, and some of the farm employees too. Straight away he said that the most important technology on the farm is CREA. CREA is a nationwide organisation that gets small groups of 10-12 local farmers together to share ideas and problems with each other, aiming to make everyones’ farm better. It’s a spirit of cooperation that is unfortunately rare in the UK.

The farm is run with a long-term mindset, so the soil quality is considered carefully. They grow four main crops: soya, sunflower, maize & wheat (occasionally barley). Between sunflower and wheat they will sometimes use a cover crop of triticale or forage rye. The cover crop is grazed if it’s on the better soils, and left to be incorporated on the worst ones.

There are three main types of soil here. In ascending order of quality, Loma, Media Loma & Bajo. All of them are predominantly sandy, going from 82% in the Loma to 70% in the Bajo. SOM levels increase as the sand content goes down, but even on the best land they are rarely above 2%. Needless to say, the farm has been no-till for 18 years, but apart from a small layer at the top, it is very difficult to add OM to the soil: as Eduardo says “the sand eats organic matter”.

There was a good demonstration today of the perils that can await when comparing different areas of a field. These two soya plants (see below) were taken from opposite sides of a small road. One is Loma soil, the other Media Loma. In just a couple of meters the soil has changed so much that the plants it raises are at opposite ends of the spectrum. The moral of the story is, if you want to compare the soil from two different management practices, take them from as close together as possible.

On the very worst soils they plant a species imported from Africa, called Weeping Lovegrass, which provides some cattle grazing, and also stops wind erosion. It is unique in my experience, as it seems to have been successful at what it was meant to do, and hasn’t gone out of control. If only all the other introduced species were the same.

One of the techniques which came out of CREA was to measure the water table. There are 13 different sites around the farm which have 3m deep plastic pipes sunk into the ground. Every month the levels are measured with a dipstick and recorded.

This information is used to decide before planting crops what sort of potential they have. If the water levels are high, Eduardo knows that they will not need a lot of rain, so he feels confident in using more expensive varieties and putting down more fertiliser. Something I found very interesting was that this data allows them to see how deep the plants can send their roots, as they can check the water table height when signs of drought start to appear. Maize and sunflower will root to 2-2.5m, but wheat and soya will only go to 1-1.5m. That is pretty important, and has potential implications for nutrient scavenging too – I had been wondering how deep wheat roots go.

15% of the farm’s maize, and some of its soya, goes to their on-site feedlot. According to Eduardo most of the beef in Argentina is now finished on grain. What about the grass-fed reputation? “It’s history”. One of the peculiarities of the beef market here (where the average person eats 70kg per year) is that they really like their carcasses to be as small as possible. In the government’s opinion this got out of hand as smaller and smaller animals were being slaughtered, and so it is now illegal to kill a heifer or steer which weighs less than 300kg. That really means the race is on to get to this weight as soon as possible, and the animals here are finished for 90 days on a maize & soya diet and killed before the age of two. I couldn’t believe they do not feed any fibre to the cattle; apparently this causes them to get liver problems, but by the time it manifests they are hanging from a hook anyway.

I started off talking about food, and that meal was good. But this one was even better, and what a location. The seven hour drive to Rosario after lunch was less enjoyable.